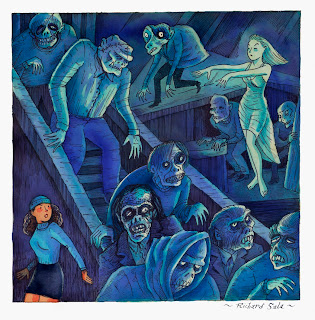 Here is a peek at a sequence I ended up cutting from my book The Hidden.
Throughout the book there are a number of dreams and flashbacks.  In my original outline, near the end of the book, the character Colleen was going to have a dream.  This sequence would have begun on page 130, right after she is knocked unconscious and before she wakes up with a start.  However, I soon realized that the sequence, placed so close to the end, slowed down the momentum - especially because I wanted the ending to be kind of quick and breathless - so I cut it out.  Before I cut it completely, I did finish one page of the sequence, seen here.
In her dream, Colleen finds herself alone in the new world.  As she tries to avoid being spotted by a crowd of the brutal "new people", she is amazed to see a strange, ethereal woman, standing among them - it seems to be a vision of some kind - one which the "new people" are oblivious to.  In the dream, however, as Colleen is captivated by the sight, she is suddenly seized by the "new people" -- and wakes with a gasp.
There was a motive behind this sequence - a vision of hope, maybe.  It was something that would be addressed in a sequel (which is sketched out in my head, although it may have to remain there for the time being; I realized after Cat Burglar Black it's best not to automatically assume your publisher is dying for you to do a sequel).
This is the second outtake from The Hidden I've shown.  The first one showed the character Sally reacting as the "new people" crash into the old trading post.  That art was used as a limited edition print, offered to folks who purchased the book at the 2011 ComicCon International.
Anyway ~ I thought I'd share a bit more about the process of putting together a book like The Hidden for those interested.  Thanks for reading!
Posted by richard sala at 12:42 PM