Night Of The Nick-Nacks 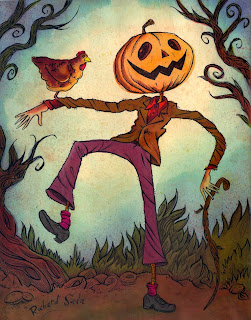 Here is my contribution to Gallery Meltdown's exhibition of art inspired by the movie Return to Oz. I've loved drawing pumpkins ever since I was a kid for some reason...
For more info on the show: Gallery Meltdown
Posted by richard sala at 12:11 PM 2 comments:

A Message From The Management 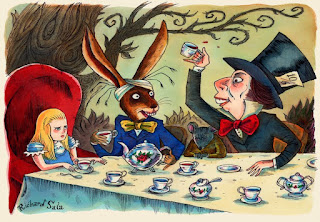 My "official" website, richardsala.com, has been down since February 20th, due to some horrific accident at Westhost. It may continue to be down until the end of this week, which is not too big of a deal I know (it badly needs updating, which I would love to do -- but that's a long story, trust me), except that I do get a portion of my mail from that site. So, if you've sent me an email recently and haven't received a reply, that may be the reason. Thank you for your patience!
Above is a recent commission -- Alice's Mad Tea Party.
Posted by richard sala at 4:38 AM 2 comments:

Down A Dark Alley, Through The Crooked Shadows... 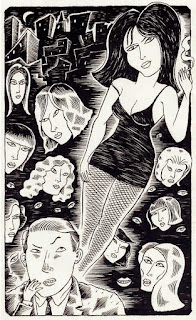 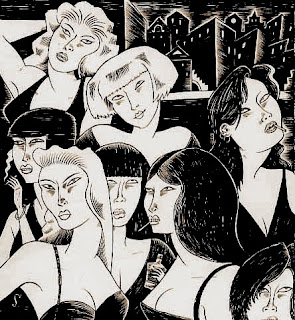 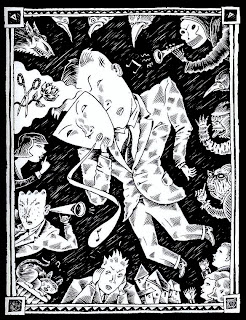 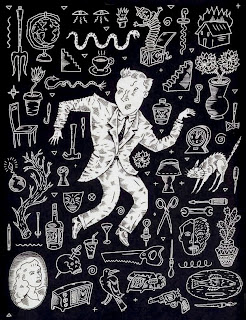 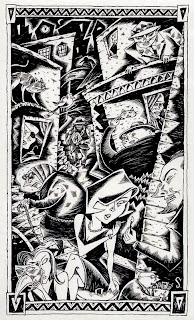 Some black & white work from the early 1990s. Top to bottom:
"Sherri & The Girls" -- Illustration for a story by the great Josh Alan Friedman (published in an issue of BLAB), 1991.
"Babes On Broadway" -- Another drawing for the same story, same issue of BLAB, 1991.
"Out In The World" -- 1992. Just personal art, which I used for the inside back cover of the paperback version of my book Hypnotic Tales.
"Anxiety Maze" -- 1992. This was also printed in the paperback version of Hypnotic Tales. (Yes, I was working through some issues).
"Night Of The Canary" -- 1993. My love for vintage genre elements had pretty much moved to the foreground by this point. It's my favorite (visual) language... Also, cats and birds, cats and birds, always cats and birds for some reason...
Still wasn't entirely certain about any future doing comics at this point in my life, even though a comic I had self-published a few years earlier led to my "Invisible Hands" on MTV. That was encouraging, but it was only a one time thing. I mainly just liked making pictures. But I also liked writing. And I liked putting them together. So - before I knew it, there were a bunch of graphic novels with my name on them in bookstores...
Posted by richard sala at 10:04 PM 1 comment: