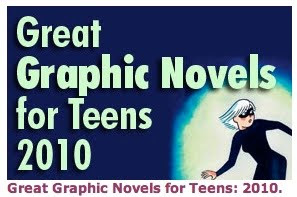 Booklist Online - Great Graphic Novels for Teens: 2010 (FEATURE)
Many thanks to Booklist for continuing to say nice things about CAT BURGLAR BLACK. Besides making the list of "Great Graphic Novels for Teens 2010" (see above link), the book also recently appeared on their list of "Top Ten Crime Fiction Books for Youth".
These kinds of mentions are important for little books like mine, and I appreciate it very much. It helps keep the book alive long after the publisher has moved on to other things. I feel sure that the many kind reviews were the reason the first printing sold out and a (modest) second-printing followed. I truly enjoyed writing a book with a younger audience in mind and I am gratified that it appears to be my best-selling book. Thanks to the publisher for allowing me to do it and to do it my way.
I've been receiving occasional letters and emails from schools and libraries with questions about the book and its characters and I want to thank all of those folks who were interested in the book enough to write. It means a lot to me. In answer to the most frequent question: A sequel has been plotted out in detail in which loose ends left dangling in the first book are tied up in (I hope) satisfying and unexpected ways. With any luck, someday that sequel will be able to join the first book on the shelf. However, these kinds of things are often sadly beyond one's control. I wrote the book so it could be read as either the first installment of a series or as a self-contained, stand-alone story with any loose ends not tied up left to stimulate the creative imagination of the reader. A little mystery is good for the soul!
So - it looks like the next book of mine to be released -- at the end of this year (knock on wood!) -- will be something entirely different and new. That's all I can really say right now. That, and the fact that there are a few other projects and surprises scheduled to start showing up late this year and early in 2011 (I suppose I'd better knock on wood again! Nothing is ever certain, unfortunately).
I'll naturally post more concrete news about upcoming projects right here when I can. Writing and drawing comics can be a long and arduous process and I am grateful for the readers who have stuck with me, been patient with me, and encouraged me through the years. Thank you all very much!
Posted by richard sala at 4:45 PM 2 comments: