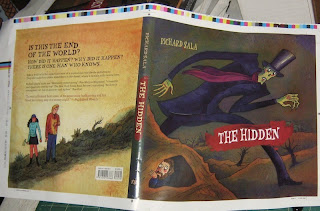 Snapshot of cover proof, taken a few weeks ago.


The Hidden will make its debut at the San Diego Comic Con later this month, where a couple dozen advance copies will be available at the Fantagraphics Books booth (along with a special convention-only surprise bonus -- more on that soon!).


Copies will be in stores a couple of weeks later (unless the boat carrying the copies sinks or is attacked by pirates, a giant octopus or a mega shark).
Posted by richard sala at 12:52 PM 3 comments:

I posted low-res scans (from photocopies) of a couple of these drawings before, but I recently came across the originals which I forgot I still had.  So here is a better (and uncropped)  look at them.  These were done as illustrations to accompany a story by Josh Alan Friedman called "Babes on Broadway," published in BLAB #6 in 1991. 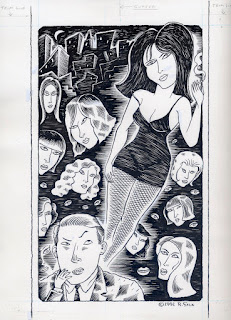 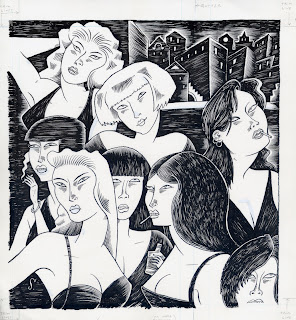 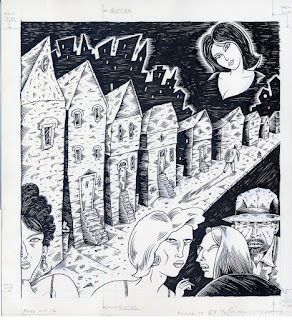 As always, some of the art featured on this blog can be found here --
Comic Art Collective - Art by Richard Sala - Original comic art from top artists
Posted by richard sala at 10:53 AM No comments: 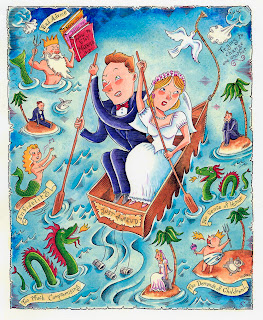 Illustration from the '00s.
I had wanted to put in "In-Laws" depicted as pirates, but that idea got nixed.
Posted by richard sala at 3:55 PM No comments: 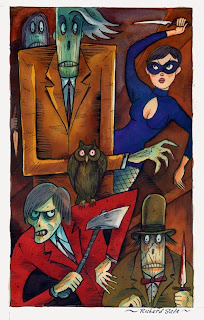 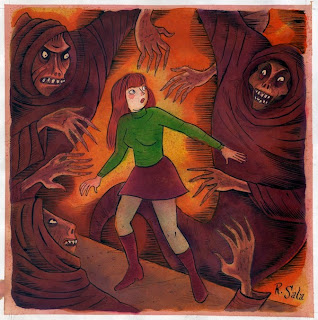 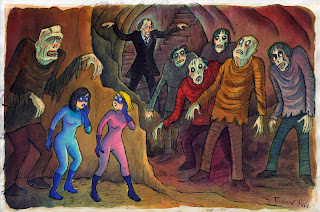 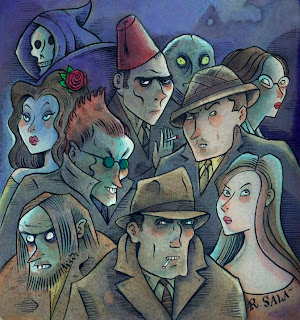 From top to bottom:


Working on ideas for stories or new books is always fun.  But because the process of creating a graphic novel can be so time-consuming, choices must be made and there are lots of ideas that must be set aside. Sometimes working on story ideas can be a way to indulge one's fondness for certain types of stories that one might like to do, if only there were time -- some light-hearted, some darker.  The first three images are examples of this.


The top two images are samples of concept art for possible future stories - done to help visualize the story and characters.  The third drawing was a commission (a good example of the kind I enjoy doing) that certainly could be turned into a story -- perhaps a sort of "Scooby Doo Meets Lucio Fulci" thing... maybe?  It would be fun to try anyway...


The last image shows a group of characters inspired by a book of short stories called "A Loud Humming Sound Came From Above" by Johnny Strike.  The art was used for the cover of the book - and I did some interior illustrations for it as well.


As always, some of the art featured on this blog can be found here --
Comic Art Collective - Art by Richard Sala - Original comic art from top artists

Posted by richard sala at 4:10 PM No comments: 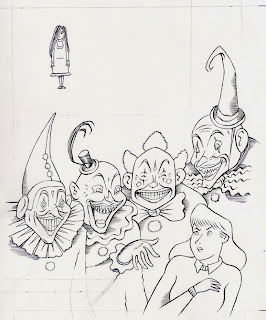 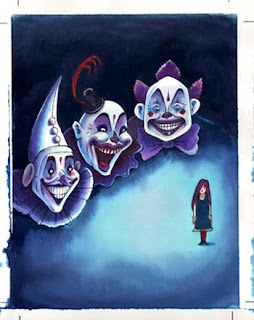 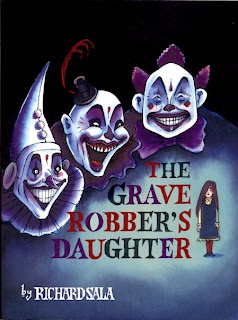 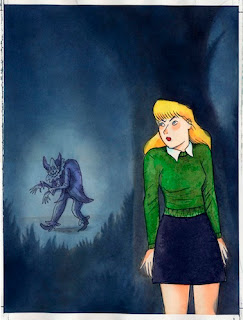 Cover art for THE GRAVE ROBBER'S DAUGHTER (2006) ~
After MAD NIGHT (see previous post), I did a second book featuring the character Judy Drood as the protagonist. This one was designed as leaner and more fast-paced than her debut, which I had worked on for about three years. In contrast, I did this one in less than six months. (For those interested, I discuss making this book in this 2007 interview with Tom Spurgeon :
The Comics Reporter ).
My original intention was to put Judy on the cover again, right up front. The top image is my original line drawing, ink on watercolor paper, showing Judy being menaced by clowns while the title character, little Nellie Kelly, looks on. However, before I'd painted that version I decided it might seem a bit confusing and unfocused to a casual observer. (Not to mention somewhat cluttered once the title had been added at the top and the by-line placed in the bottom left corner).
So I did a second version, placing Nellie up front and taking out Judy altogether. I did do some sketches trying to work Judy into the background - but those ideas just wouldn't work with the small size (6" x 8") of the book. So, Judy went and I ended up taking out one of the clowns as well.
I immediately liked the effect that came from simply moving the small figure of Nellie to the front. Now the clowns were looming over her, mocking her with evil laughter, while she stands completely unruffled and without fear. That actually summed up her character much better than the first idea.
Judy does still show up on the cover -- although it's the back cover. The last image shows the original art for the back cover before all the text, prices and UPC box were added.
As I mentioned in the previous post, I've almost always created fake covers (stand-ins for whatever the final cover will be) for my books for the Norton book catalog because they need them so far in advance -- and this one was no exception. But, this time - sorry! - I'm choosing not to show it. Not only is it really bad and embarrassing, it illustrates an early version of the story where Nellie is a (red-headed) teen-ager being leered at by not only evil clowns, but an entire evil circus as well - ringmaster and all! But this little book was all about cutting the fat -- streamlining and getting down to the leanest and meanest details -- so, by the second draft, the evil circus folk all ended up on the cutting room floor - all except for (as Judy might say) those #@%!&*$!! clowns.
Posted by richard sala at 4:02 AM 1 comment: