THE HIDDEN: Postmodern Prometheus (and other reviews) 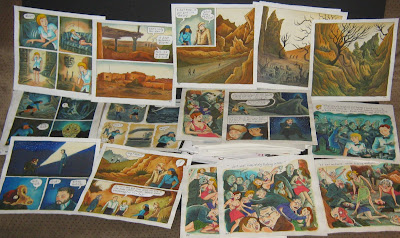 My publisher, Fantagraphics Books, has kindly assembled a list of about thirty excerpts from reviews of  THE HIDDEN since the book was released ~

(Top:  A snapshot of a stack of the original artwork for the book)

Posted by richard sala at 10:27 AM No comments:

Quadrummando was once a scholarly explorer named Hector Cleeves.   He became lost in the jungles of Ecuador and stumbled upon the ancient ruins of a lost civilization where, inside a ruined stone temple, he discovered the secrets of life after death.

Living for months on jungle fruit and hallucinogenic plants, he learned how to use astral projection to explore the unseen corridors of reality. On the astral plane, he encountered the wandering spirit of a malevolent shaman whose mummified body was entombed in the ruins.   Their two spirits fused and were able to enter and reanimate the mummified body.

Eventually, a rescue party discovered the explorer in the jungle and he returned to civilization, bringing the mummy with him.  Once back home, he used his ability to inhabit the mummy to seek revenge on those he felt had wronged him.   His diabolical methods of murder included head-shrinking and the claw of a tropical jungle raven dipped in lethal curare.

He felt confident that no one would ever be able to discover his strange secrets and defeat him ~ but that was before he encountered Phillipa Knicely, the telekinetic teenager.

If you are ever lucky enough to have your very own butler, you couldn't hope for a better one than Ambrose.  Ambrose is Peculia's butler, although she can't quite remember how that happened.  He was just always there, living in his own private quarters in the big, secluded house she inherited when she was just a kid.

Peculia was always a curious child, especially when she was younger, but Ambrose, for the most part, demurely refused to discuss himself.  All Peculia knows for certain about Ambrose is that he was loyal member of her family's staff for many years ~ and that they had arranged for him to look after her when they were gone.

When she was a student at Reynardine, she spent most of her time there.  But her final year at that school was an unhappy one so she was glad to return to the big old house and live on her own ~ all alone, except for Ambrose.

A good butler is discreet and never intrudes where he isn't needed.  But at the same time, he ought to be able to recognize when his mistress could use a helping hand.  And in fact, Ambrose seems to have a sixth sense  for knowing when his mistress might benefit from his presence.

For example, there was that time Peculia had wandered into a new grocery store called The Three Sisters ~ and before she knew it, she had been taken prisoner by the eponymous proprietors who planned to cut her up and eat her!  Things looked pretty grim, because these three evil sisters practiced black magic and could not be killed in any ordinary way.  They shared a single enchanted heart which was locked safely away in an iron box in some far off tower - and none of them could die as long as that heart was protected.  Now, Peculia is clever and most likely could have extricated herself from the awful situation on her own.  But she was glad nevertheless when Ambrose showed up unexpectedly and ~ well, he really is the perfect butler.  (See: Peculia)
Posted by richard sala at 6:15 AM No comments: