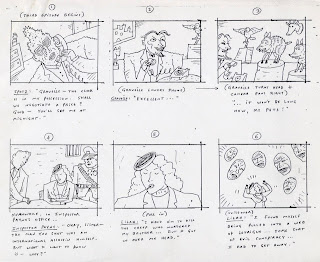 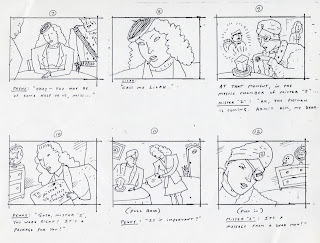 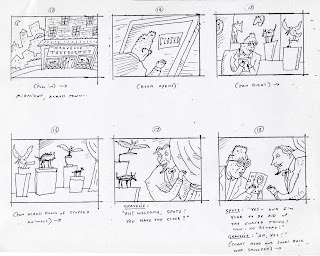 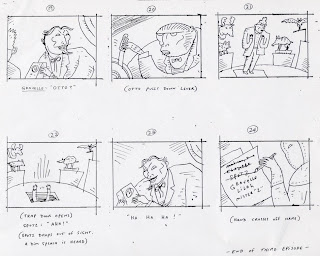 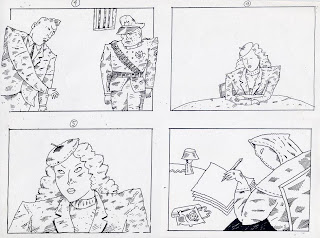 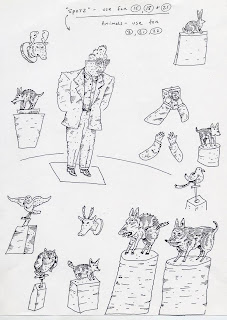 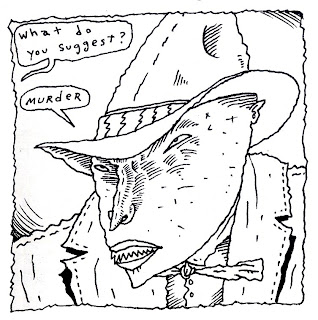 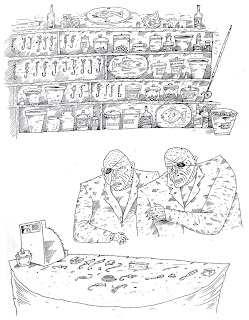 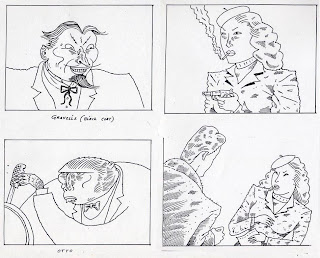 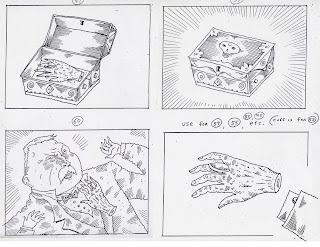 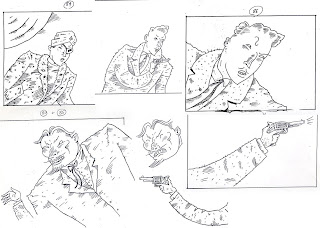 The art of "Invisible Hands" 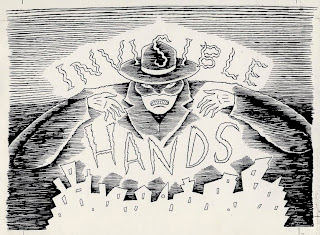 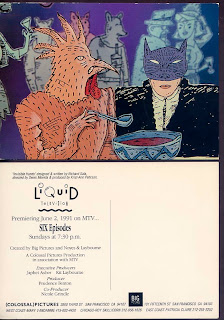 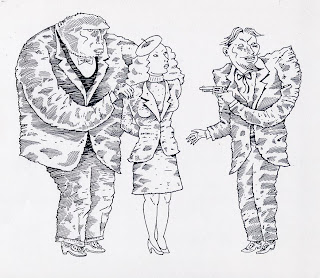 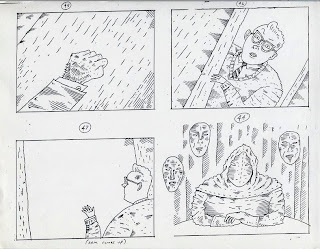 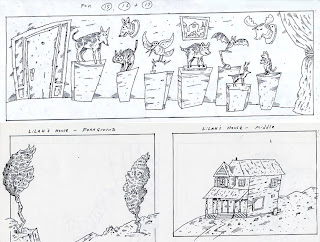 "Invisible Hands" was a six-part animated serial which aired on MTV in the early 1990s. MTV had hired Colossal Pictures, an animation studio located in the Bay Area (where I was, too) to produce Liquid Television, a show that would feature lots of new animation. After one of the producers saw "Invisible Hands" in Night Drive, my first (self-published) comic, which was then selling at City Lights and other independent bookstores in the San Francisco area, I was hired to write and draw an expanded version for their show. The first season of Liquid TV was to consist of six episodes, and "Invisible Hands," which I had written as a tongue-in-cheek version of old-time mystery thrillers, would run in each episode as two-minute chapters of a complete 12-minute serial.
So I went to work expanding the story, drawing the story-boards and lots of new art. Then I'd drive them over to Colossal where the staff would blow up my drawings onto colored paper. Next, the director, Denis Morella, made the art come alive by photographing the cut-outs (which were positioned on three layers of glass to give the illusion of depth) using stop-motion. It was pretty primitive, I guess, but I really liked the jerky effect that resulted.
"Invisible Hands" was shown a lot on MTV during the early 1990s, sometimes even in a complete 12-minute version. MTV & Colossal kept all the original artwork I did, but luckily I made a bunch of photocopies, which, I recently realized, I've never shown before. So, here are a few for now. I can post some more soon, as well as some of the storyboards.
At the top is my drawing for the opening credits. Next, the original promotional postcard, advertising the debut of Liquid TV, with a scene from "IH" (the costume party) on the front, followed by more of my drawings -- characters, interiors & exteriors --- before they were transferred to colored paper.
I used to get asked about this serial a lot. It's never been on video in either VHS or DVD (there are reasons) though other Liquid TV animations were. However, it has been on YouTube for a long time now, so I don't get asked about it as much as I once did. I'm just glad that folks can (finally) see it again if they want to. And I hope some people may enjoy a look at the drawings I did for it.
(note: Animated version of "Invisible Hands" is copyright MTV & Colossal Pictures. Print version of "Invisible Hands" is copyright Richard Sala)
Posted by richard sala at 6:43 PM 11 comments:

Sketchbooks pages of the past 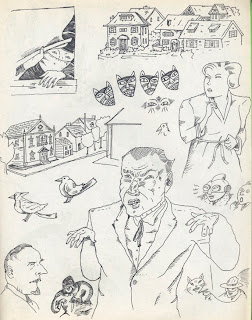 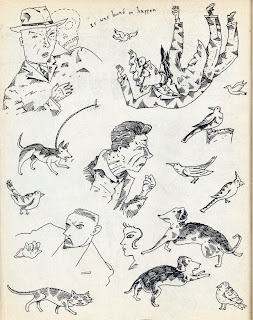 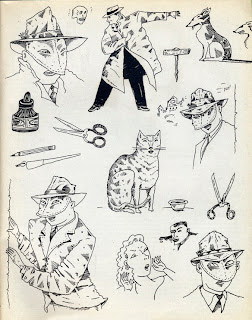 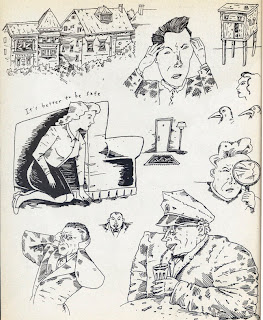 Years and years and years ago there was a magazine that printed pages from artists' sketchbooks. They asked me to contribute, so I photocopied a bunch of pages, then cut & pasted the sketches so I could get in as many little drawings on the four pages I was given as possible. (I mean, some of the actual pages only had one or two drawings on them -- not very interesting, visually, I thought; plus I couldn't figure out which four pages to use -- so that was my solution; I reduced them & cut out the drawings & fit them all neatly together, with the goal that they just be fun to look at.)
Anyway, I'm kind of glad I made copies of these pages because a few years later these and other sketchbooks were destroyed by water damage. There was a leak in the ceiling directly over the cabinet where the books were stored, which I didn't notice until it was way too late.
So -- here is a glimpse of some of my sketchbook pages from days gone by...
Posted by richard sala at 5:40 PM 7 comments: 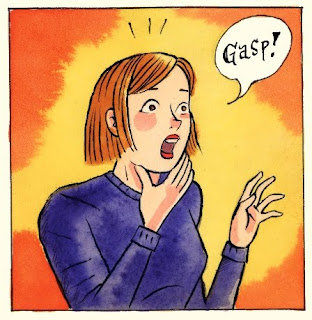 Thanks to everyone who checked out my sneak preview of The Hidden last week. Thanks also to the folks at Fantagraphics, The Beat, The Comics Reporter, Comics Comics and The Groovy Age of Horror among others for letting their readers know about it. A lot more people checked it out than I imagined would, because of them. Also, I really appreciate the kind & encouraging words from those who took the time to write to me personally about it. That always means a lot.
Thanks again!
Posted by richard sala at 6:44 PM No comments: 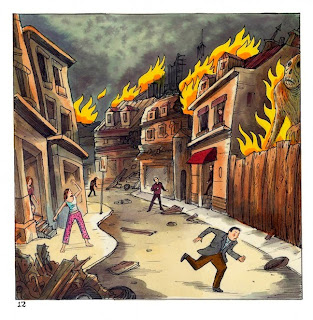 Follow this link to see a 13-page sneak preview of my book THE HIDDEN, scheduled for Spring/Summer 2011:
THE HIDDEN by Richard Sala
Posted by richard sala at 12:33 AM 4 comments: 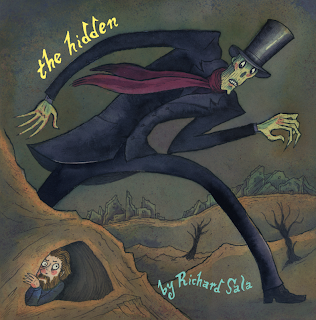 My book THE HIDDEN, originally scheduled for this Fall, is a bit behind schedule and won't be out next month as originally planned. Pushing the release date up to sometime early next year will allow me to spend more time on the hundred plus pages of full-color artwork. I want to thank my publisher, Fantagraphics for being so understanding! This book is a bit different from anything I've done before, and, hopefully, loyal readers will feel it's been worth the wait. Thank you (and apologies!) to all the nice people who have been asking about it or telling me they are looking forward to it. It's still coming -- just not as soon as originally announced.
However (this is the "special announcement" part), for anyone interested, I will be posting a sneak preview of THE HIDDEN online. On Thursday, September 9, 2010, I will be posting the first 12 pages of the story, along with a thirteenth page from much later in the book (a sneak preview inside a sneak preview) at an online location to be announced on that date. Watch this blog or the Fantagraphic's blog for details. The preview will remain up for as long as I think it should. I may even add extra sneak peaks and details as time goes on, up until the book is finally released. I do this in the spirit of fun (hey, it's a comic!) and as a gesture of thanks to my loyal readers, who are the coolest people in the world.
Posted by richard sala at 12:27 PM 5 comments: